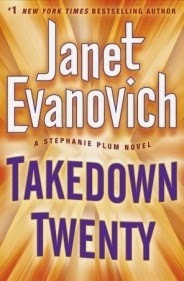 I haven't given up on this series yet.  I am still enjoying it...even though yes it is following the exact some plot format as the rest of the books.  Here is the goodreads description:

New Jersey bounty hunter Stephanie Plum knows better than to mess with family. But when powerful mobster Salvatore “Uncle Sunny” Sunucchi goes on the lam in Trenton, it’s up to Stephanie to find him. Uncle Sunny is charged with murder for running over a guy (twice), and nobody wants to turn him in—not his poker buddies, not his bimbo girlfriend, not his two right-hand men, Shorty and Moe. Even Trenton’s hottest cop, Joe Morelli, has skin in the game, because—just Stephanie’s luck—the godfather is his actual godfather. And while Morelli understands that the law is the law, his old-world grandmother, Bella, is doing everything she can to throw Stephanie off the trail. It’s not just Uncle Sunny giving Stephanie the run-around. Security specialist Ranger needs her help to solve the bizarre death of a top client’s mother, a woman who happened to play bingo with Stephanie’s Grandma Mazur. Before Stephanie knows it, she’s working side by side with Ranger and Grandma at the senior center, trying to catch a killer on the loose—and the bingo balls are not rolling in their favor. With bullet holes in her car, henchmen on her tail, and a giraffe named Kevin running wild in the streets of Trenton, Stephanie will have to up her game for the ultimate takedown.

Stephanie Plum is again on one of her little bounty hunter heists. She still is mixed up with two loves Ranger and Morelli. Now while normally I can't stand that she messes around with these two guys in this book she does OK. Though honestly I don't know why she just doesn't chose Ranger. He has money, a great job, and seem like he might commit (in this book people finally start calling him Batman). On the other hand we have Morelli who doesn't want to commit.  This plot line I think needs to be moved along.  When you are twenty books in .. normally I want to see the main character get forward in life.  Stephanie is now in her 30s, wants kids, wants a good job, wants a grown up house, wants a working car.  I just want her to get something good in her life!

I just can't seem to quit this series.  Yes it's not the best literature ever... but it makes me smile and laugh. The books are very short which is all I need really.  I always end up waiting forever to get it from the library.  I start at like #300!  So people love these books.  At least there is no monkey in the book this time... there is a giraffe instead.  For some reason.. I actually enjoyed the giraffe.  I usually get annoyed when there is some odd animal added into the series, but I thought the giraffe was funny.  Just saying.

One thing that disappoints me in the books is that Stephanie is never the one to actually catch the big fugitives.  She always has to get help.  I don't know why but that annoys me.  Really she should not be a bounty hunter. I read that Evanovich is contracted for 22 books... so will the next two books be the last ones?  Probably not.  But here's kind of hoping.  I read through all the reviews that others have done and it seems a lot of people are feeling the same way.

Here is my review of  Notorious Nineteen by Janet Evanovich
Posted by Angela's Anxious Life at Saturday, January 04, 2014